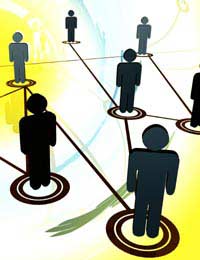 Why on earth would local business networking help a B&B? Well, one answer is that you won’t know until you go to find out, but don't expect results to come quickly. Business networking is all about building trust and rapport and that tends to take time.

So what is business networking? It's a very popular activity and in most regions you'll be able to find groups that hold networking events at breakfast (possibly not the best time for a bed and breakfast owner!) lunchtime or in the evenings. Some networking events are very formal, others informal, some run on a commercial basis, and others are effectively volunteer-run.

At these meetings there is usually a presentation from a speaker. This can be a sales pitch but it's a bit of a turn-off, so speakers are usually asked to make the presentation informative instead. Many local networking events will give each person a short period (anything from ten seconds to five minutes) to stand up and say who they are and what they do.

You can also make connections with the people who are in the room, either before or after the events, sometimes both, or over a meal. Some of the commercial networking events will follow a format that creates opportunities for people to get together, others let it happen naturally.

What could you get out of such a meeting as a bed and breakfast owner? Here's a list of the things you might get out of a networking meeting:And for many very small businesses it's that last one that is reason enough. It can be a lonely job running a business like a bed and breakfast on your own or as a couple. The interaction with people at the meeting, who are local and not customers, is a rare opportunity to relax.

Getting the Best from a Networking Event

What many people don't get about business networking is that you have to attend for some time in order to become an accepted part of the group. A lot of people go to one meeting, walk away without having got any business and never come back. If you decide to give it a go then go to every meeting for at least six months.

Don't oversell, just get to know people over that period because the time when they might be useful to you might not happen for a couple of years. Many people who go to networking events for a long time are constantly amazed by the tenuous connections they make that suddenly deliver new business out of the blue. And often you won't even know that the link has come from a particular business network because word has passed outside the group.

Put the Time In

Going business networking may work for a B&B owner, it may not. But if you do decide to give it a go, commit for at least six months regardless of what happens, because it does take time for word to get around and for your face to be know to the network.

Should You Accept Pets at Your B&B?

Branching Out Into the Spa Market