Home > Case Studies > What Did Volcanic Ash Ever Do for Us? Case Study

What Did Volcanic Ash Ever Do for Us? Case Study 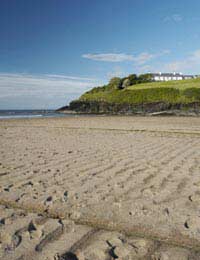 During the spring of 2010 the travel world in Europe was turned upside down by ash from a volcanic eruption under the Eyjafjallajoekull Glacier in Iceland. The rest of the story is well known but there have been unexpected beneficial effects on the United Kingdom tourist sector.

The volcanic ash came on top of the credit crunch and economic downturn which had already decreased the number of Brits flying abroad for holidays. The newly invented 'staycation' (actually just a newly-coined term for 'not going on holiday') meant an increase in the number of short breaks in the UK.

We spoke to one couple running a luxury B&B in South Wales, who had seen a real increase in short break business, about how they'd positioned and marketed their hotel.

"It sounds trite but location plays the biggest part," said Diana Morgan, sitting on the veranda, looking over gentle rolling hills toward the blue of Cardigan Bay, "I mean we could have all the things we have here but if we weren't in a place that looks so fantastic and peaceful, with the right mix of isolation and facilities, we'd be dead in the water."

Diana and her husband bought the Georgian eight bedroomed B&B twelve years ago, when the property boom was in its infancy. It was a farmhouse at the time, but the farmer had decided to build a smaller, modern house half a mile down the road.

"He said the farm had slowly moved down the hill over the last two hundred years!" Diane said, "I suppose we are a bit exposed up here but you can't have the views without that."

But the great thing about the farm's slow migration was that there were no huge ugly barns, just a few old brick stables and pig pens, so they add to the period look. The Morgans have tidied the outbuildings up a little and will eventually convert them if there's a need for extra accommodation.

Positioning at the Top of the Market

The Morgans put £60,000 into the refurbishment and conversion with en-suites throughout and straightforward but high quality furnishing and decoration. Then they started marketing, using City contacts from Jeremy Morgan's days as a merchant banker.

"We are almost certainly the most expensive B&B or small hotel in the region, but that's a calculated risk," Diane said, "we advertise in low circulation magazines that reach the right people. It was going as well as we expected, just about, but the volcanic ash has really been a big bonus for us."

Time, Not Money, is the Driver

For the market they are targeting money is less important than time. And although the M4 can sometimes be difficult, the Morgans have picked up business from people who would usually fly to Milan or Marseilles for a short break.

"It's not being able to be back at their desks at 8am on Monday morning that scares the pants off them," Diane laughed, "we're not as cosmopolitan as a city break but we offer peace and relaxation with a number of good restaurants only ten miles away."

Those ten miles are a slight worry though. At the moment the Morgans take their guests to and from the restaurant they choose, free of charge. Not only is this disruptive for them but a lot of guests feel they are imposing, so they are uncomfortable with the arrangement.

"It's a bit of a minefield, and it would have to be top-notch cooking, whether it's one of us or someone we bring in," said Diane. "I think it’s probably part of the next stage of development, do we stay as a B&B or make the transition into a small hotel? We really aren’t sure at the moment"

Making the Best of a Seaside Location: A Case Study

The B&B That Failed: A Case Study